Interviewer : hello, i have some questions to ask you since you seem to interest many of our readers.

Marilyn : ask away my friend.

Interviewer : what do you think of the place of women in the modern society ?

Marilyn : Well, to my mind we are not considered enough as human beings but more as just « wives » or « maids ».As  for me, most of the people I meet  see me as a doll, just here to be seen as a woman to turn on men in my movies . My image is too much sexualized while I simply wanted to be a symbol of feminity.

Interviewer : What about your personnal experiences in the world 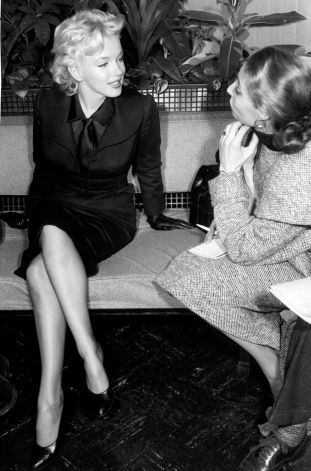 Marilyn : I guess this image of me exists for everyone, even producers consider me as a dumb bimbo. I often had sexual demands from my bosses or colleagues, it was really shocking and disturbing ; just because of the parts I played I am thought to be «that type of girl ».

Interviewer : How could you describe yourself ?

Marilyn : I don’y know but I am definitively not what others think.

Interviewer : Well, thank you for your answers.