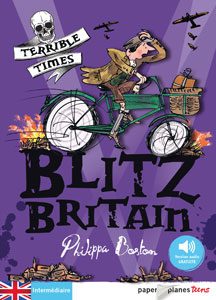 The story takes place in England in London on 29th December 1940. It takes place during the Second World War. The German army dropped bombs over London during the night. This is called the Blitz: it was forbidden to go out at night. There was a total blackout.

One child, Billy, helps his father to deliver some meat during the air raid. He delivers meat to the Savoy hotel during an attack. When coming back to his bicycle, he takes a different way than his usual  way because the latter is on fire. So he makes a detour by St Paul’s cathedral . The cathedral has a bomb dropped on it and burns down. When he enters St Paul’s Cathedral, he saves a man who wanted to push the bomb outside the dome. He saves him. The little boy goes back home to tell his mother about his adventures and to take tea with her.

Look at AM’s presentation of the historical facts :

I’ve found this book is interesting because there were two parts: the first one tells the story and the other one is the fiction that happens during the war.